Skip to content
FREE FedEx Express shipping on all orders!*

*1-3 day delivery to most countries worldwide!

Free shipping is available for a limited time only. 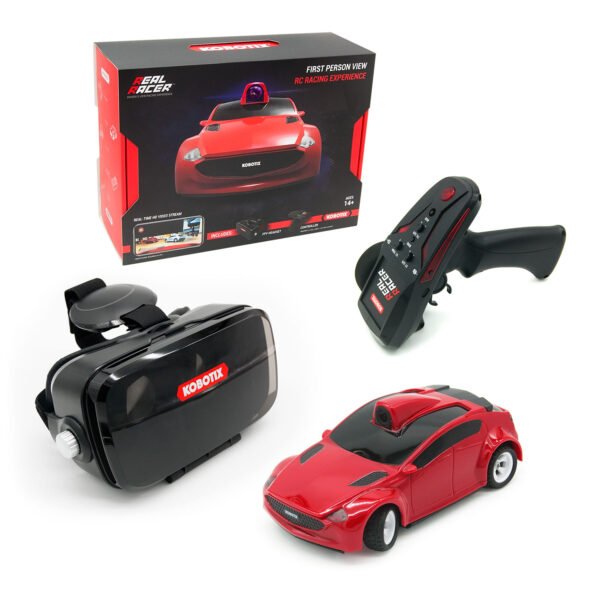 Real Racer is the First Person View (FPV) racing experience that puts you in the driver’s seat of your RC car!

✅ See what your car sees – taking every twist and turn as if you were sat behind the wheel.
✅ Experience the thrill of racing head-to-head against friends and family.
✅ Record your races and share your fastest laps with friends.

Want to race with friends? Check out the Real Racer Twin Pack!

WHAT PEOPLE ARE SAYING ABOUT REAL RACER

“This little car is a lot of fun, and I’ve tested out a lot of FPV products”

“The FPV view is awesome; image quality is really nice”

High definition video beamed straight from the car to your smartphone lets you take every twist, turn, jump, and spin as if you’re sat behind the wheel.

Snap your smartphone into the included headset and transport yourself behind the wheel of your RC car for the fully immersive, in-seat, race view.

Experience the thrill of racing in real-time with minimal lag thanks to our best-in-class low latency video streaming technology.

Speeds of up to 15 km/h (9.3 mph), four-wheel drive, independent suspension, and a fully proportional 2.4 GHz control system that gives you precise manoeuvrability around every corner.

Record your race and share your fastest laps with friends by posting to Facebook, Instagram and more. Show off your skills and see who’s the best racer!

No more crashing into walls or sliding out when you take a corner too fast! Real Racer uses a gyroscope to keep you in control, so you can focus on winning the race.

Race all the way to the finish line! The interchangeable batteries provide up to 25 minutes of run time, so you can go the distance.

With interchangeable body shells, you can have a car that is better suited for you. You can even create your own custom design with the blank body shells.

The world’s first RC car allowing you to live stream your race directly to Twitch, Facebook Live and many more – allowing viewers all over the world to tune in and view your race in real-time! See HERE for details.

DECK OUT YOUR MAN CAVE

FUN FOR THE WHOLE FAMILY

BRING IT TO WORK

AND SO MUCH MORE!

GET BEHIND THE WHEEL WITH REAL RACER:
THE DRIVER'S VIEW RACING EXPERIENCE!

Rating
4.6
Based on 21 Reviews
Write a Review

This is a really cool R/C car. Quality is excellent - the car looks and drives great. The control is intuitive and the car is super responsive. The first person view is a very cool feature. Video quality is good. I've got a couple of entry level drones and video quality is on par with those. Will always be some connectivity issues with this type of product - the further you get the more likely to lose video for a second.

I have glasses, so I was a little hesitant about 3D goggles, but I was able to take my glasses off and use the headset and see just fine. This little RC car was so much fun and so zippy! I charged it up and plugged in the battery, downloaded the app and paired it to the car, as instructed (it paired very easily), and then I was off! I didn't have a problem racing the car through my house, other than the intense speed! I was frequently spinning 180 when I'd try to do a turn or shooting off beneath the couch (headlights would have been lovely!) but it was so much fun to drive this car around and see my house (and me!) from car-height. There's also a way to change the goggles to use your phone camera, so you can see "through" them without needing to take them off, such as if you needed to rescue your stuck car. The car did fine on hardwood and carpet, but it didn't do so well on the transition between. If you didn't hit a transition at full speed, you ran the risk of bottoming out and getting stuck. This happened a few times, but the see-through option for the goggles was enough to let me free it. Things were a bit disorienting, such as seeing yourself through what felt like your own eyes, and I, prone to motion sickness, was feeling very queasy very quickly, but I was still having a great time with this car. I was going to record some of the video for my review, but in driving it, I realized just how dusty my floors were and, uh, yeah. The world doesn't need to see that. It was a LOT of fun, though!

Our son absolutely loves this and to be honest so do I! It’s pricey at close to £150 but there is a voucher currently taking it down to around £120. The technology in it is brilliant with the VR headset and the ability to live stream the action. The app for it was easy to download and set up on my iPhone. The build of everything seems really good quality and the car has had a few bumps along the way without any issues. It’s best suited indoors as outdoors was just a bit too bumpy and made for some interesting VR viewing! The only minor issue are some of the claims of running time and range - these seem a little high compared to what we got in reality but this is t enough to stop us giving this 5 stars!

This is an awesome RC car, though the car is a bit smaller than I expected, it works well on carpet or wood floors. The controls are smooth and easy, it goes pretty fast! I wish it were quieter for sneaking up on people but my cat loves chasing it! The VR headset is a cool idea to use on conjunction but it's lots of fun without it. Anybody could enjoy this car!

This remote control car is great fun. Driving it using the camera gives you a different perspective that makes you feel you are actually driving it.

My OH and brothers have had great fun playing with this as, under supervision, have my older nephews. In the box you get – the car; its controller; a rechargeable battery pack to power the car; a headset to hold a mobile phone for FPV app use; a USB charger; an instruction manual; a screwdriver to open and close the battery compartment on the car itself, and a microfibre cleaning cloth. Before first use, the wheel for the controller needed to be attached, and the battery pack installed. The controller requires 4 AAA batteries, inevitably not included, to provide a power source. As a remote control car, this is good to use. The car has glossy plastic body work and individual suspension on the wheels. The controller is sensitive and responds well in use. The car does well over carpet, hard flooring, and short cut grass, but not so well over our gravel drive. The camera, to give a driver’s eye view of the car’s journey, is built on to the middle of the roof. The visor is well-made and comfortable. This has adjustable straps with clip fastenings and is nicely padded around the eye area, with faux leather covering over the padding. There are two viewing lenses and control dials on either side to adjust focal length. A dial on the top of the visor adjusts the distance between the viewing lenses. There is a release button to open the front panel to allow a mobile phone to be added. My phone – an iPhone SE – fits inside the visor with a bit of space to spare. I’m not thrilled about the excess space – I noticed that several of the people who have been using this move about a quite a bit in line with what’s going on on the display and I was a bit worried that this was going to dislodge the phone from the thin plastic bar holder at the middle and make it slip about. This could do with some kind of adjustable frame so that it can fit different sizes of phone well. I get motion sick and don’t get on hugely well with this kind of VR, but my OH and brothers have really enjoyed playing with this. The camera is pretty good. Its recordings are clear and easily visible. We’ve had some vehicles with disappointing inbuilt cameras, where the recordings are murky and hard to see – this one has decent quality video. Records video to a micro SD card, which goes under the bodywork for the card (and needs unscrewing to access this).

Go to Top
Manage Cookie Consent
To provide the best experiences, we use technologies like cookies to store and/or access device information. Consenting to these technologies will allow us to process data such as browsing behavior or unique IDs on this site. Not consenting or withdrawing consent, may adversely affect certain features and functions.
Manage options Manage services Manage vendors Read more about these purposes
View preferences
{title} {title} {title}
Buy On Amazon.com
Buy On Amazon.co.uk